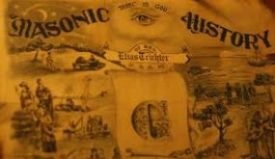 Chartered on January 31, 1853, San Jacinto Lodge #106 A.F. & A.M. has been a part of the growth of the great community of Willis, Texas.  Before becoming the City of Willis, the town of Danville was established in 1853, and the first site of San Jacinto Lodge. In 1870, the town ofWillis was born. Peter J. and Richard S. Willis, landowners of nearby Montgomery, Texas, donated a townsite to the Houston and Great Northern Railroad (now the Union Pacific), allowing it to pass through the town. Currently, the lodge is located at 106 Bell Street, where it has been since 1955, very near the same railroad tracks. The following  is a historical look at some key events in the life of this lodge.

Published during the 1870s, one of Willis’ newspapers, the Willis Index, was owned and operated by M.C. Leslie, who was Master of the Lodge eleven times from 1875- 1900. In the June 29, 1885 and July 31, 1885, and October 16, 1885 editions of the index under “Lodge Notices” it read: “San Jacinto Lodge #106 meets the first Sunday before the full moon in each month. M.C. Leslie, WM.” While still in Danville, from 1853 to 1855, San Jacinto was known as a “moon lodge.” A  moon lodge meets according to the phase of the moon, instead of on the same day every month. This was historically done to assist members with riding their horses to the lodge at night, by taking advantage of the moonlight.  This custom is still observed by some Texas lodges.

On May 5, 1919, a fire broke out in the Runnels store on the first floor of the Masonic hall and spread north through other buildings. The cause of the fire is not known and caused $35,000 in damage. The lodge would catch fire two more times in different locations between 1882 and 1919 before settling on its present property. Interestingly, all the owners of the buildings were members of the lodge and past masters or would be at a later date. Later that year in 1919, the lodge was granted a charter to meet in an unoccupied second floor of a school building where the Master Masons Degree would be conferred on Brother L.Q. Goff. Goff would go onto serve as Master of the Lodge in 1922 and 1926.

It was reported in lodge records, that the lodge had rented the south wall of the building to Target Advertising Co. In December of 1935, the lodge changed from being a moon lodge to having meetings on the first Monday of each month. During the 1940s and up until the 1970s several references were made to an annual oyster supper. In February 1951, there were over 100 in attendance for the oyster supper and did not close down until 11:15 p.m. Presently the lodge has stood at 106 Bell Street since 1955 and remains a vital cornerstone within the community.